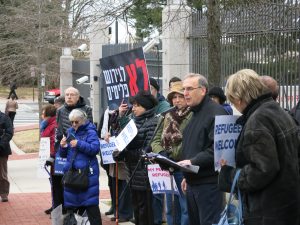 Note: These were remarks given at a Pre-Passover Vigil held in front of the Embassy of Israel in Washington D.C. on March 27, 2018.

I am Rabbi Sid Schwarz. I am the founding rabbi of Adat Shalom Reconstructionist Congregation in Bethesda, MD; a life-long Zionist and a Board member of Truah: The Rabbinic Call for Human Rights.

Three nights from now, we will sit at our Seder tables. The Seder tells our people’s master story which begins with our ancestors being slaves in the land of Egypt, in Africa. The triumphal moment in the story is the recounting of our ancestors’ redemption from slavery, allowing them to travel, through the desert to the land that God promised to Abraham, the land of Israel.

The Seder is both an historical re-enactment and an ethical charge. Some years, we test our imaginations to make it a re-enactment. But that has not been the case the last few years. The world today is flooded with refugees, over 60 million. Each and every one of them is looking for their Promised Land, a land in which they and their families can be safe. In the past decade over 50,000 Africans facing war, oppression and death in their home countries crossed the same desert that the Israelites crossed in the Passover story—the Sinai–and entered into the State of Israel. 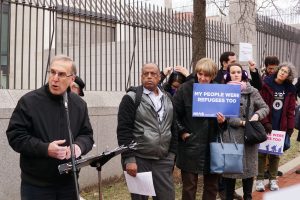 In the Haggadah we read: Kol dichfin yatai veyachol –“let all who are hungry, all who are needy, come into our homes and eat.” This is the ethical charge of the Passover Seder.

Jews are rightfully proud of the state of Israel and its accomplishments. It is a country that has been settled by and built by refugees. After WWII, Israel offered a refuge to the Jews of Europe who were decimated by the Holocaust. In the 1950’s Israel took in Jews from Arab lands. In the 1980’s Israeli’s engineered a remarkable rescue of Jews from Ethiopia. And, in the 1990’s Israel took in almost a million Jews from the FSU. Wherever Jews have faced oppression, Israel has been a place of refuge.

But the true test of Biblical hospitality is opening our gates to those refugees who are not part of the majority culture. The government of Prime Minister Benjamin Netanyahu has announced that starting next week, Africans who came into the country illegally will be deported to Rwanda or Uganda. Tens of thousands of Israelis have protested the decision, arguing that such an action violates a core principle upon which Israel was founded.

In that same spirit, over 900 rabbis have signed a letter to Prime Minister Netanyahu, co-sponsored by HIAS, the New Israel Fund, Truah: The Rabbinic Call for Human Rights and Right Now: Advocates for African Asylum Seekers in Israel. I am proud to be among the signers.

It reads, in part: “We write as Jewish clergy from around the world to urge you to stop the deportations of asylum seekers from Sudan and Eritrea who have sought refuge in Israel. As a country founded by refugees and whose early leaders helped to craft the 1951 International Convention on the Status of Refugees, Israel must not deport those seeking asylum within its borders. We Jews know far too well what happens when the world closes its doors to those forced to flee their homes….”

“…Our own experience of slavery and liberation and our own experience as refugees compel us to act with mercy and justice toward those seeking refuge among us. Please affirm these Jewish values as well as Israel’s international commitments by stopping the deportations.”

In the Biblical story of the Exodus, we are told that Pharaoh “hardened his heart” against his Hebrew slaves. We know what hard hearts look like. In the United States it is promoted as America First and it threatens 3.6 million undocumented immigrants and 800,000 “dreamers” who came to this country as children. Hard hearts are contagious. We now read of Hungary First, Austria First, Italy First, Myanmar First. Each of these countries has its unique victims. And now, Israel First. For every country that closes its heart and closes its borders, the most destitute people on our planet suffer.

These remarks were published in the New York Jewish Week on the same day as they were delivered.

« It is Called “Covenantal Community” » Outside In: Jewish Education that Matters