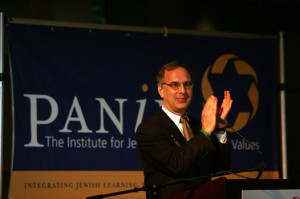 In 1988 Rabbi Sid Schwarz had a simple idea with huge implications. Observing how many young Jews were alienated from their Jewish identity and drifting away from Jewish affiliations, he created a program that would ignite the passion of the next generation of Jews to repair a broken world.

For more than 20 years PANIM has educated, inspired and empowered Jewish youth to a lifetime of activism, leadership and service on behalf of the Jewish people and society at large.

“PANIM students represent the best and brightest within the Jewish community. Through PANIM they come to understand the very unique place in history that Jewish Americans find themselves. Our grandparents couldn’t dream to come to Capitol Hill in an organized fashion being guided by a program like Panim el Panim with all of the energy and respect it brings to the process.”
– Rep. Robert Wexler (D – FL)

“The PANIM program empowers young people in a way that very few other organizations can do. Participants leave the organization with a sense, ‘I have to do something with what I’ve learned. It’s not enough just to have participated, but I’m carrying deeply inside me the seed which I’m going to allow to grow into an action that is going to make me a better human being and the world a better world.”
– Avraham Infeld, President Emeritus, Hillel International

For a chronology of PANIM’s highlights over the years, click here.

You can find more information about the PANIM Institute on their website.