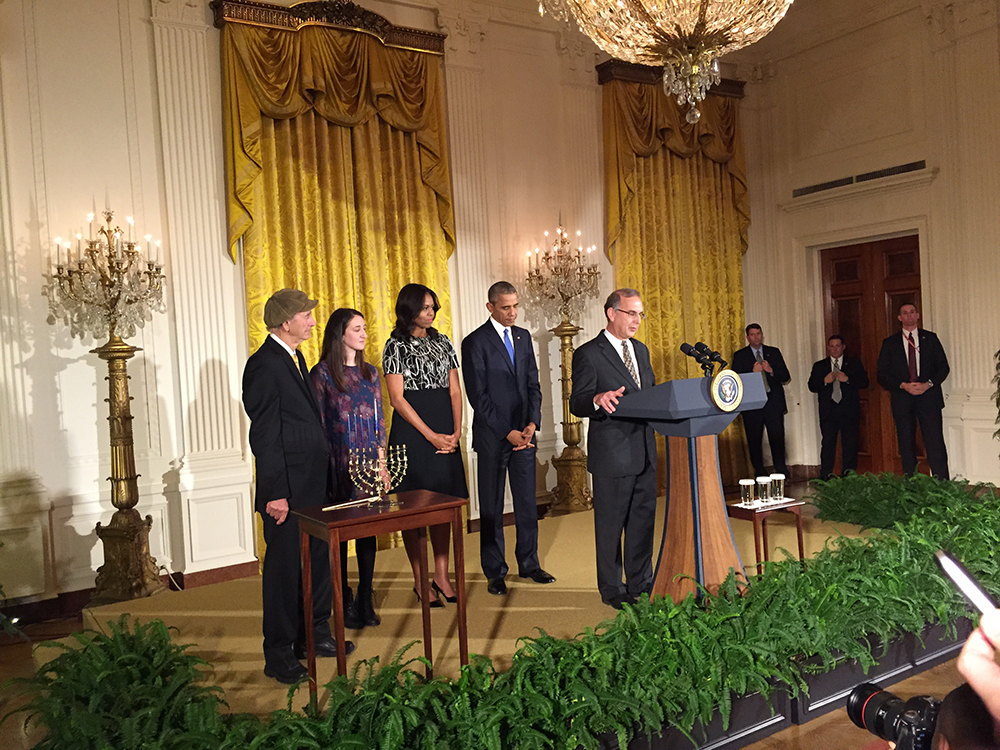 I know that I speak on behalf of everyone present tonight in expressing our gratitude for the way that you and the First Lady have, once again, opened up your home to the Jewish community for an annual White House celebration of Chanukah.

Chanukah is a festival of liberty, teaching us that freedom is not free. When there is evil and tyranny in the world, we must summon the courage to fight it. Sadly, we are reminded of this by the daily headlines. Not too long ago, Jews were the ones on boats seeking refuge from the horrors of Nazi Europe. The special affinity and love that Jews have for the State of Israel is because, after 2000 years of wandering, Jews were able to be, in the words of the Hatikvah: “free people in our ancestral homeland” (am chofshi b’artzenu).

But for most of us here tonight, America is our home, the most hospitable country for Jews in the entire history of our people. I know this first hand. Both of my parents were survivors of the Shoah. My father was born in Berlin. He left two weeks before Kristallnacht in 1938 at age 16. He came to America on the last successful voyage of the St. Louis. The next voyage of that ship came to be called the Voyage of the Damned because its 937 Jewish refugees were sent back to Europe, having come within sight of Miami Beach. Five years later my father would proudly put on an American uniform and return to Europe to fight with the U.S. Army to defeat the Nazis.

The word Chanukah means dedication. At a time when we hear the most shameful expressions of bigotry in our public discourse from prominent personalities, we must re-dedicate ourselves to the principles of tolerance and justice for all, something that you, Mr. President, have modeled throughout your presidency.

So it is in that spirit that I invite you to join me in the blessings for lighting the candles with the addition of the shehechiyanu prayer, offering gratitude for this moment celebrating Chanukah in the White House.